“Meet de Boys on the Battlefront,” a confrontational chant aimed at intimidating other tribes, flows from a stage somewhere on Colorado Springs’s westside. Tribe, led by “Chief” John Harper Wise, is a staple of the city’s music scene. Meet de Boys…by The Wild Tchoupitoulas, is a call-and-response style chant typical of Mardi Gras Indians. The album, The Wild Tchoupitoulas, was basically, The Meters, who were the Neville Brothers: Aaron, Cyril, Art, Ivan and Charles.

John Wise knows about Mardi Gras Indians and New Orleans, Louisiana (NOLA) music. In the Springs, John is synonymous with Mardi Gras. He said of his favorite NOLA musicians, “The Neville Brothers Band never “made it,” but their stuff was so good,” adding, “Aaron Neville has the voice of an angel and the body of The Hulk.” Four years ago, John was honored to “parade” with Mardi Gras Indians on St. Joseph’s Day, the last time of the year when all the tribes get together. 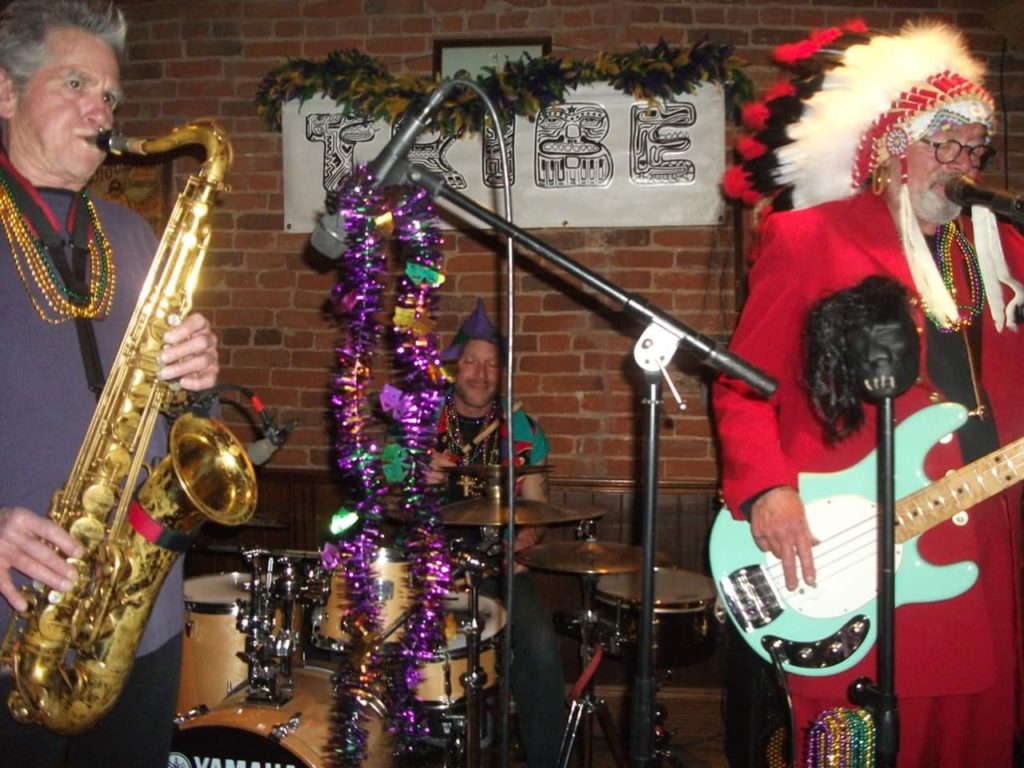 Tim Zahn, a great keyboard and accordion player, was in a band with John (Johnny and the Jukes). Tim was John’s inspiration for NOLA music. Tim and Dave Deason (drummer for Big Sky), who played washboard, had a gig with two cousins visiting from Lafayette, La. It was their own project, playing zydeco. John said, “I persuaded them that they needed to include me in that, and they did, and it ruined me. NOLA music has all the elements: blues, jazz, zydeco, Cajun, and island music-a gumbo of happy, soulful sounds.” On a recent visit to NOLA, it seemed to John that the music has lost its way with pat songs like “Brown Eyed Girl,” “Mustang Sally” and ”I’m Going to Kansas City” spilling out of every corporate-owned, Bourbon Street bar. John wonders, “Where’s the blues, zydeco, island music, the flavor of creativity? It seems that 99% of the music you hear on Bourbon Street is commercial, music you can hear anywhere and it’s not flavored by New Orleans. There are still lots of great musicians there, but you have to find them.”

Like many budding musicians of the 60s, the Beatles grabbed John’s attention. At the age of twelve, he got his first guitar. John said, “My musical background all came from my Mom’s side of the family.” John reminisced, “Sitting in church, my mom was on one side, singing in perfect pitch, and my dad on the other, not so much. I kinda learned how to do both.” Such modesty…John’s maternal grandfather played clarinet in a Joplin, Missouri orchestra, and his maternal great-grandfather played organ in silent films. So yes, John has music in his blood.

John explained, “My first electrical instrument was a guitar, although I wanted a bass. I figured that I had four fingers and it had four strings. How hard could it be? But, my dad discouraged me from getting a bass.” John played guitar, but remained drawn to the bass, so he went back and forth for awhile. John said, “My first bass was a Sears and Roebuck, and was made of masonite. It had the speakers and amp in the case. It was so cheap!” 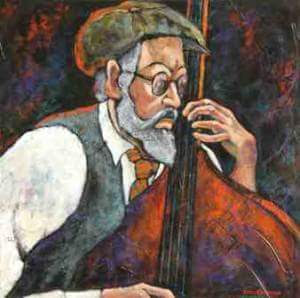 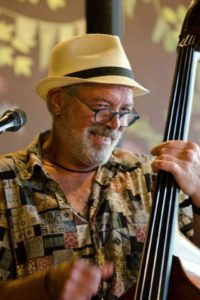 John’s parents didn’t really want him to play music. They said, “John, you’ll be stuck in smoky bars and staying up late,” but they respected his decision, and he continued playing through junior high and high school. His first gig was at Old Mission Junior High School, playing guitar at a party. He said, “I played guitar through junior high, but eventually moved into the bass,” I thought, “There were lots of guitarists and not many bass players, and once again, how hard could it be? I have four fingers and the bass has 4 strings. By my last year of high school, I got into blues in a major way.”

“There was a day when I got turned on to the blues.” John said. “I had this little soul band. I was drawn to soul music because I could sing like Wilson Pickett, but I never expected to be that. Our keyboard player, whose dad was a jazz drummer in Kansas City, MO at a ritzy, uptown hotel, turned me on to B.B. King, Freddie King, and the Butterfield Soul Band, all in the same day. I was so blown away. I had never heard music like that! I wanted to be a part of it!”

John’s band wanted to join a union. There were two musician’s unions in Kansas City at that time; a white musician’s union and a black musician’s union. The cost to join the white union was $205, the 5th most expensive union in the country, and financially, out of range. Plus, the band didn’t like the way they were treated.  John said, “Our keyboard player’s dad said he knew someone who belonged to Local 627, the black musician’s union, and that he would talk to him. Well, we went down there. Here we were; five, little white boys, and they welcomed us with open arms. This was Count Basie, Charlie Parker and Big Joe Turner’s union—heavy hitters! The union hall was at 16th and Highland. We had to go through the red-light district to get to it. It was a deep, dark, fabulous ghetto, and my first, physical exposure to black musicians. They were awesome and made us feel so accepted. They allowed us to join, while white unions wouldn’t allow blacks.”

“The union hall was like a club. They’d have after-hours, jam sessions that would start at 1:00 a.m. and go to 4:00 or 5:00 a.m. on weekends,” John remembered. ”I didn’t drive, but we had a drummer in the band who did. My parents were strict, and one Sunday morning I came home at 5:00. My mom yelled from the bedroom, ‘John, is that you?’ I said, “Yeah, I’ve been down at the union.” ‘Ok,’ she said. It was probably a saving grace that John’s mother loved Ella Fitzgerald and his dad was a big fan of Louis Armstrong.

In his early twenties, there was a ten-year span when John didn’t play blues. He was traveling a path where he decided that music was too secular, although he kept his guitar and played some John Denver. Laughing, he said, “Don’t hold it against me.” One evening, there was a certain appearance on the Tonight Show that brought him back, It was B.B. King. “I had forgotten,” John said, “Oh, my God, what am I doing?”

John said, “The coolest things happen in music, and if you keep playing, you’ll get better…usually.” Some of John’s favorite musicians are Taj Mahal, whose music is eclectic: blues, island music, and folk. He’s a Keb Mo fan and he credits James Taylor as an incredible song writer. John’s appreciation is not lost on local talent. He compliments Jimmy Lange, about whom he says, “He blows me away,” then excitedly mentions Michael Reese, Teddy Nazario, Rob Landreth and Jana Lee Ross. John said, “Susan Rissman and I have been playing together at Rico’s for over ten years. There are so many, I respect and admire.”

When asked why he made the switch from upright bass to bass guitar, John’s explanation made sense. “While healing from a torn shoulder, I got an electric bass—aah. The upright is cool, plus it’s shaped like a woman, the real deal. But it’s heavy. And, it’s delicate. Popping a bridge is expensive and the sound post has to stay in place to sound right. It’s a novelty, but there’s a lot of maintenance and it’s a challenge to play in bars.” 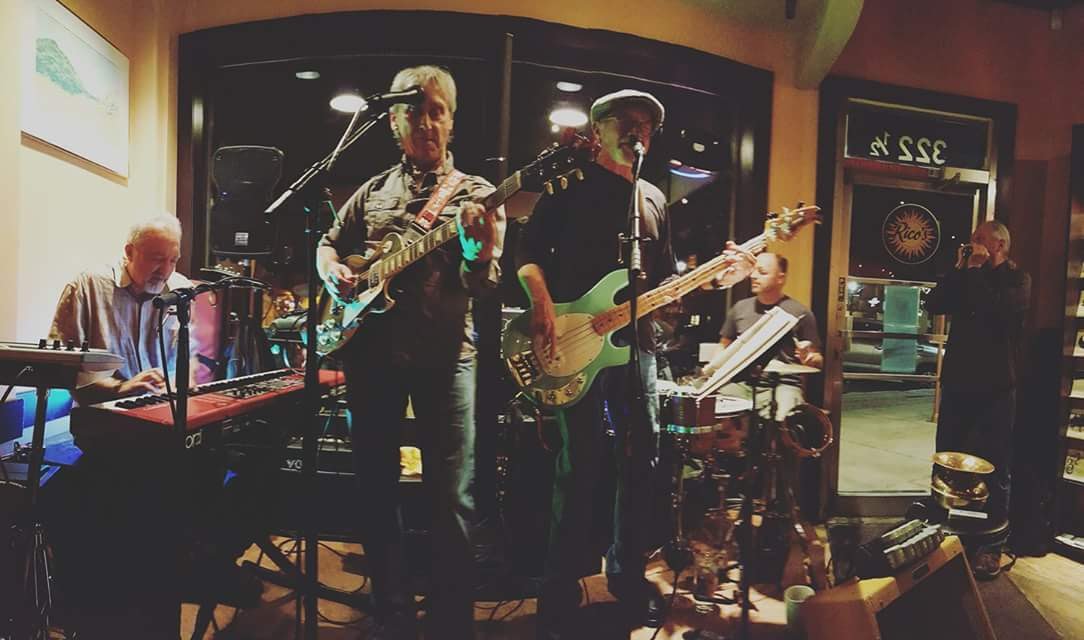 John Harper Wise was born in Kansas City, Missouri. At the age of five, he had his first Colorado experience, when his parents went to a church camp in Estes Park. Even at that young age, the Indian culture impressed him. After camp, John had to go home to Kansas City, but he never forgot Colorado. In 1990, John was working in Topeka, Kansas as a registered nurse, specializing in perfusion and operating a heart-lung machine. An opening for a job as a perfusionist came up in Colorado. The rest is history. John said, “I had the best of both worlds. I feel lucky to be a musician with a retirement pension. But, it was tough; twenty years of being on call and gigging.”

The first time John “sat in” after his move to Colorado, was at Ancient Mariner with The Bull Frog Blues Band. The second jam he frequented was in a club at Circle and Galley, called, “The Gardens,” owned by Scott Harrison’s dad. He said, “Those were my introductions and I’m still of the opinion that when you are new to a town, the best way to get to know musicians is to go to a jam session.”

When asked how the music scene in Colorado Springs could be improved, John is in agreement with many other area musicians, especially when it comes to performance times. This school of thought is to have the bands play during dinner hours (7-11), in the case of restaurants, and 8-12 in other venues. John said, “It would help business and the diners would likely stay an extra hour.” At the latest, 8-12 would work, but 9-1 is too late for the older crowd.

The words: lucky, appreciation, and thankful, when talking “music,” often flow from John, especially when speaking of Tribe. “Michael, Jimmy, and Teddy make it so easy.

Bands are like a family; lots of personalities. The members of Tribe are conscious of the need to get along, and of sharing the load. My theory on being a band leader is; It’s all about service-not a leader who is  bossing bandmates, but leading to serve.”

John Wise is an integral part of the blues community in Colorado Springs, and PPBC is honored and excited that he will be “giving back” by mentoring young musicians in the PPBC School of Blues. 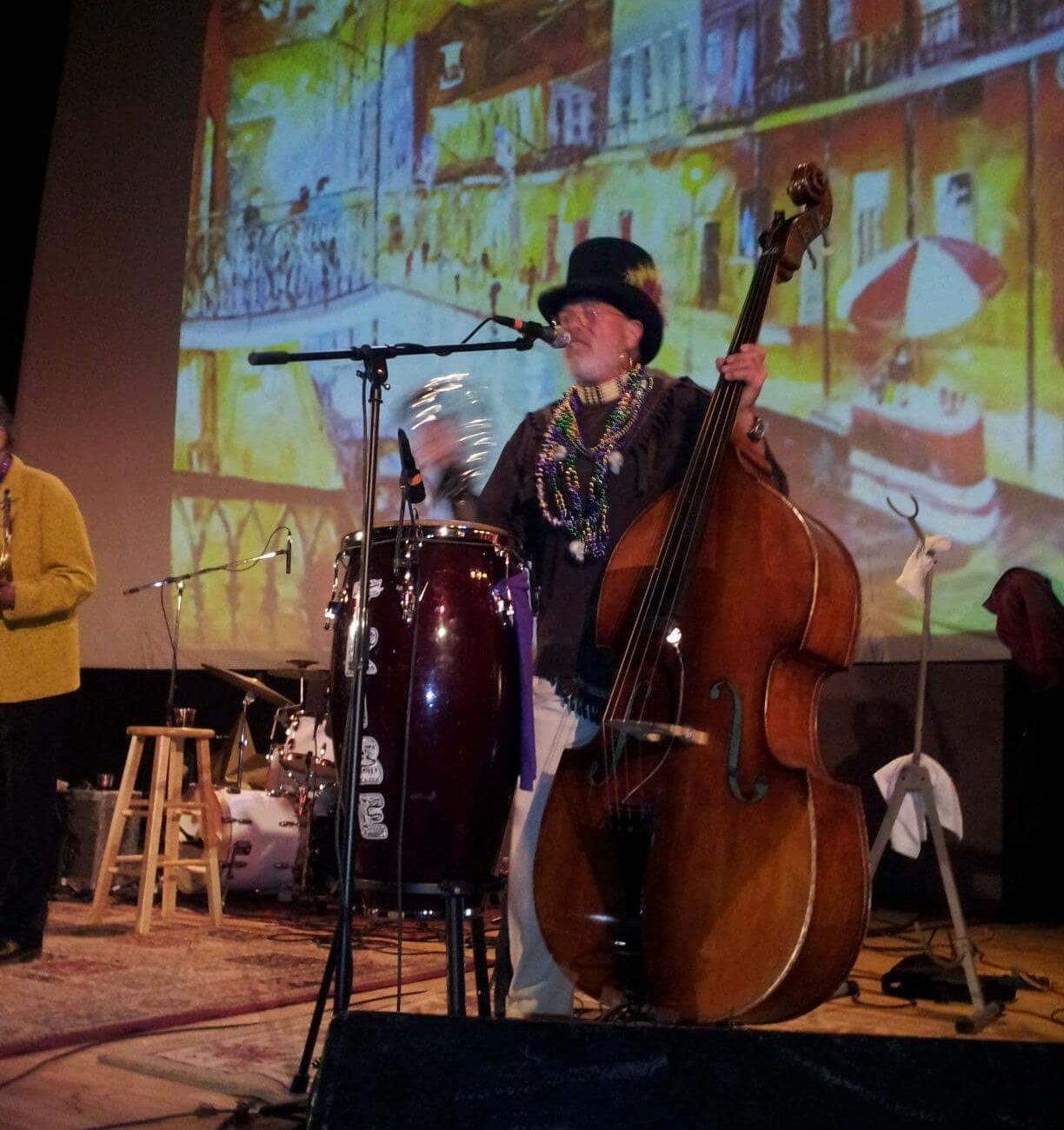